Posted by Anders Göranzon at 14:12 No comments:

It is sad! At the same time it is nice. Bittersweet! I am talking about the time to say goodbye.

Two weeks ago I preached at the Lutheran Theological Institute. After the service there was a short program with students and colleagues saying nice things. And so a present. After that vote of thanks. Many hugs. Some tears.

One and a half week ago the School of Religion, Philosophy and Classics arranged tea for the staff. My wife and I had baked cakes. A nice speech from the Dean, some singing and a chance for me to say a few words about the time at the School.

Yesterday I preached in the Lutheran Church at Eastwood. It has not been part of my job description to lead services there from time to time. The same with my wife, who has made other contributions to the life of the church.

The way the congregation thanked us was overwhelming. This has been our spiritual home during 2½ years. The Sunday School had prepared a drama, the youth sang. The Women’s league did that as well. After some persuasion from the oldest member, Mrs Dolphin, the fathers also delivered an item.

My colleague, Rev. Kholiwe Biyela, spoke with warmth. Yes, it was in deed touching.

We were also given very nice outfits, to wear in Sweden. These are typical modern Zulu outfits.

We really appreciate all the farewells – each one in their own right!

We often say that South Africa is our second home country. This means that we will be back!


Posted by Anders Göranzon at 18:09 No comments: 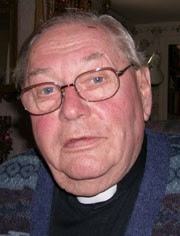 Today my friend and mentor - in a sense one of my spiritual fathers - Axel-Ivar Berglund was buried. The funeral service, with Eucharist, was held in the Cathedral of Uppsala. Here in Pietermaritzburg we held a memorial service. It started at 11 am and ended 1.30 pm – exactly when the funeral in Uppsala began.

The chapel at the Lutheran Theological Institute was not full but many people came. Former students and colleagues of Axel-Ivar as well as the students of the institute were there. A few persons were given a chance to say a few words, among them two retired Lutheran pastors: Rev. Nxele and Rev. Naika. Also prof Draper from UKZN, one of my colleagues, spoke.

The service was led by Bishop Biyela. The local dean, Myaka, and another pastor also took part in the liturgy. I chanted the Swedish funeral prayer (begravningsmässan). So, the service was held in English, isiZulu and Swedish.

So many good words were said about the life and contribution of Axel-Ivar. A priest, an ecumenist, an activist, an academic were some of the perspectives. His zulu name was used by some: Dabulamanzi, which means 'the one who crosses waters', if I am not mistaken. Rev. Naika, who is from the Indian community, gave him the title: My Guru. 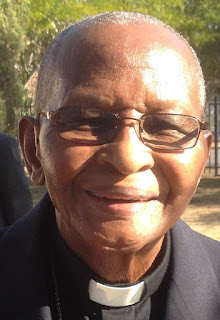 The strongest impression today the oldest, present person made on me. Rev. Nxele came with his wife. He was driving himself. 91 years old. He was ordained in 1958 by the bishop of Stockholm, Helge Ljungberg, who had flown down to South Africa because the local bishop had died. After ordaining Rev. Nxele, bishop Ljungberg consecrated a new bishop in what was then the South Eastern Region of the Lutheran Church. His name was Helge Fosseus.

When I was writing this blog post I felt I needed to check the spelling of Rev Nxele’s surname. So I googled. And I found his name in an article. In a footnote. The article’s title is:

Black critics of Lutheran Mission in Zululand and Natal in the 1950s, with particular emphasis on socio-political issues. By: Odd Magne Bakke

Both the retired Zulu pastor, R. E. Nxele and the retired missionary A.I. Berglund
emphasized this fact in interviews with the author respectively in Durban (November 2008) and in Uppsala (October 2010).

Isn’t that strange. There they are. In an academic article about the critique of western mission in South Africa.

Today they were united in another way. Far apart in so many respects but in the sacramental reality close.

Of course it would have been fantastic to be part of the funeral Service in Uppsala, but in the universal church it does not really matter. I know that a colleague from Pietermaritzburg, Rev. Bongani Zulu, was present in Uppsala, in the cathedral where his great, great uncle, Joseph Zulu was ordained as the first African priest of the Church of Sweden in 1901.

The relation between the Evangelical Lutheran Church in Southern Africa and the Church of Sweden is old and there are so many personal links. I feel privileged to be part of this relation. I am thankful for the world wide – in the true sense of the word – Catholic Church.

Today this church, which crosses over borders, celebrated the life of a son of the soil: Axel-Ivar ‘Dabulamanzi’ Berglund.

Posted by Anders Göranzon at 22:28 No comments: 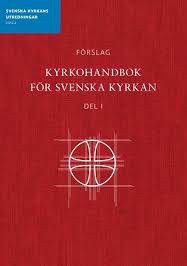 Posted by Anders Göranzon at 17:12 No comments:

When I was 20 I came to South Africa the first time. Apartheid was still a reality. In the legislation and in praxis! I remember one time, when I went to the post office in Athlone (or was it a police station?) and tried to enter through the entrance with a sign:

Someone stopped me and I had to go to the other door. But I came in and found myself in the same room as people who had used the other door. The only difference was that I was in another queue.

Apartheid is no longer part of the South African constitution. In reality South Africa has a long way to go, before reaching equality.

When I flew with British airways from >Sweden to South Africa last week a similar thing happened. Different queues. (Yes, it happens in every airline!)

Of course the person who is prepared to pay more is entitled to get a bigger seat. I understand that. But why are different queues needed? The people in business class will not leave before the rest of us?

British Airways even takes it to another level. The sign for those in the fast track have such a big sign but the rest of us have a tiny little one.

But of course, I am still among the privileged few that get to travel by air at all. I know that.

Posted by Anders Göranzon at 17:27 No comments: 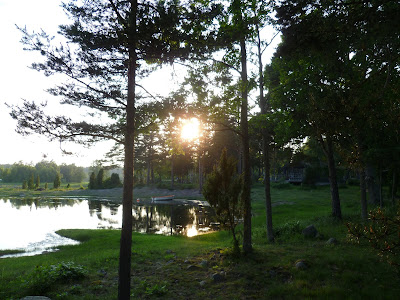 As media has reported already last week, for instance the Mail and Guardian, the Police Minister of South Africa has filed a report on Nkandla, where he concludes that President Zuma does not need to pay back any money. All upgrades were necessary, says Police Minister Nathi Nhleko.

Now our Lutheran Church, ELCSA, has issues a statement. It reads:


The Evangelical Lutheran Church in Southern Africa (ELCSA) in her 130th Church Council sitting dated 1st – 3rd June 2015 would like to add its voice in condemnation of the defensive stance as reflected in the Police Minister Nathi Nhleko’s Nkandla Report that absolved President Jacob Zuma from repaying any money for the security upgrade to his home.

We slam Nhleko’s report which contradicts the findings of Public Protector Thuli Madonsela and we want to categorically state that it is shocking and a grave mockery of justice. Failure of the President and the relevant ministers to own up to the unjustifiably high costs of the upgrades damages the moral integrity of the whole governing system.

As states by the SACC we believe that the review of the Public Protector’s report should have been conducted by a competent independent body or arm of government and not by a minister who serves the whim of the Office being investigated.

As a Church we also appeal to all citizens to unite across political, social, economic and religious persuasions to hold all of us who are in positions or influence accountable.

“We will continue to pray for the government to be directed in the ways of justice, honesty, peace and dignity for all”.

We can not sit back and condone that the Visitor’s Centre, the amphitheatre, the cattle kraal and chicken run and the swimming pool are security related. How the Minister has arrived at the conclusion leaves us with more questions than answers. Our view point does not discount the fact that we appreciate the need to protect the President and his family; however the costs incurred to date are exorbitant and have cause public outrage.

We urge the Minister and President Zuma to own up and take the citizens of this Country seriously by owning up and implement the recommendations of the Public Protector.

It is good. Maybe also brave. I see some signs that churches in South Africa are reclaiming a prophetic role. I welcome that.

Presently I attend a conference at the University of the Western Cape, where the Anglican Archbishop Thabo Makgoba also criticized the government. He said:


The ruling party fears a strong and united church.

He also asked, which I found surprising:


When do we as an ecumenical church withdraw our moral support of a democratically elected government?

Also the South African Council of Churches has spoken out an blasted President Zumas behaviour in parliament:

SACC's Preseident, Siwa, said in the statement, according to ENCA.

Some impressions after a wedding

On Saturday one of our five children got married. It was wonderful. It was a warm (although it rained cats and dogs) and loving day, which started with a solemn church service. After that a long and super fantastic dinner followed. The party continued until after sunrise. (Guests a bit younger than me have told me so!) Swedish sunrise in the end of May is quite early in the morning.

Two families are joined in a new constellation. It is a great thing.

One special aspect was that the couple had asked for a smartphone-free wedding. Hence I see very little from the occasion on social media. It was good to see young and old talk with one another instead of being somewhere else. No one updated Facebook!

Therefore I also am a bit reluctant to write about it on my blog. It was something that we were invited to enjoy IRL (in real life). The photo I publish is therefore perfect for the occasion. It was taken when the bride and the groom together with parents, siblings and in-laws jumped in front of the camera. It reminds me of impressionistic art.

It says something about the wedding. Colourful. With action. Joy. Fellowship. 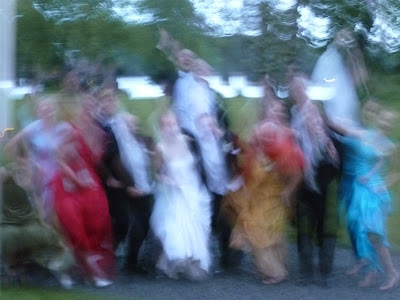 Posted by Anders Göranzon at 17:13 No comments: