Breaking news this day. DA's Helen Zille announces that Dr Mamphela Ramphele stands as the presidential candidate for the DA. It is still too early to say what will happen with Agang SA. According to radio news (SAFM) today not all senior members of Agang are happy.

It is not the first time smaller parties join the DA. It happened to the Independent Democrats. Their leader, Patricia de Lille, is now the DA Mayor of Cape Town.

Whereas the ANC has seen many splinter groups (like PAC, UDM, Cope, EFF) it seems as if DA is working in another direction, drawing smaller groups into their sphere. Zille, Ramphele and de Lille are women. Zuma, Lekota and Malema are men – just to mention a few).

To be honest one has to mention that the National Party merged with the ANC after some years. And the IFP leader, Mangosuthu Buthelezi, became a minister in the ANC lead government. He is now talking to Malema. And Cope is talking with ACDP. It is not easy to understand. But it is interesting!

Read more one the websites of:

Posted by Anders Göranzon at 12:07 No comments:

Are we a bunch of losers?

The Lutheran Theological Institute (LTI) in Pietermaritzburg has opened for the new academic year. This means that we can start attending morning devotions there again, after the summer break.

This morning’s devotion was led by Bishop Musawenkosi Biyela, one of the teachers. He read one of the texts for this week – from Isaiah 49. The context is that the people of Israel are in exile, because they have not obeyed God. Based on that the bishop said:

We are all a bunch of losers.

One cannot understand this unless one heard the words of South Africa’s Sports Minister, Fikile Mbalula, who yesterday said about Bafana Bafana (the South African male national soccer team):

What I saw was not a problem of coaching, it was a bunch of losers.

It is nothing strange that a preacher in South Africa uses soccer as a context in a sermon. The bishop went on saying that God punished the people of Israel. I have some concerns with this kind of theology. I believe that God is the saviour. But of course, God did not save the people of Israel from being taken to exile. So, one has either to say that God was not able to save them or God did not want to save them. (Which in itself could be interpreted as a punishment). Yes, I know, this is an unsolvable dilemma. The Theodice problem.

The point that Bishop Byela made was also related to another context, namely the start of a new academic year. After the defeat comes a new beginning. When God allows us to go through defeat, God also brings us to a new beginning.

Maybe he and the students are hoping for a new beginning for Bafana Bafana. Or a new, better beginning in the theological studies.

It is always good to listen to the bishop. I do not always agree but he always give me some food for thoughts. Sometimes I also feel like a loser. And surely, sometimes I am a loser. Then my prayer is, that God will lead me to a new beginning.

Posted by Anders Göranzon at 19:54 No comments:

The Role of Christians in Violence Against Women, Young Women and Girls

An independent institute, Ipsos, has made a political survey in South Africa with interesting results. I have not seen many surveys before. This one was reported by TV the other day and the result, if general elections were to take place today, are the following (compared to 2008 and 2012)

A few things can be said about this:

1. ANC is decreasing and may have problems in achieving two thirds majority.

2. Only DA can compete with ANC.

3. EFF is more popular than Cope. (Which means that break aways from the ANC is more likely to succeed the first election after the break away. Look at UDM, which only holds one seat in the national assembly).

4. Agang has not managed to gather enough support.

Maybe others can get more information from the tables. News24 makes the following analysis:

Issues contributing to this include the Marikana shooting incident, the scandal around President Jacob Zuma’s R206m security upgrades to his Nkandla home in KwaZulu-Natal and to other ANC leadership issues.

It is going to be interesting. I don’t think the ruling party will fall under 50% but maybe get close.

Posted by Anders Göranzon at 15:59 No comments: 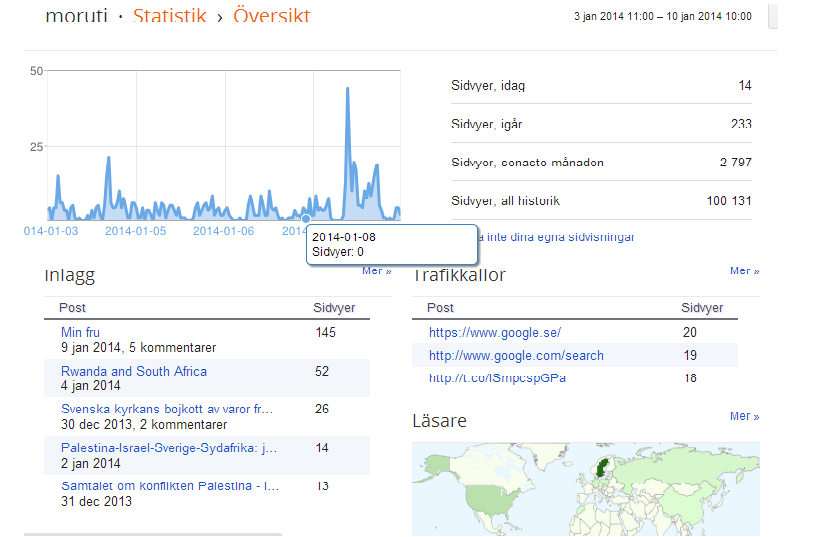 On 29 December I listened to a good sermon. The preacher said something about good and evil taking place at the same time in our context but we usually only focus one of the two. She gave an example: the Rwandan genocide, which took place while South Africa celebrated its first democratic, general election. (Over 500 000 Tutsis were killed between April 6 and and mid-July 1994. Close to 20 million South Africans went to the polls on 27 April the same year.)

According to the Sowetan Gauteng Police is hunting his killer. The Independent has a suspect: Paul Kagame. In an article online one can read:

Patrick Karegeya knew Paul Kagame well. The pair went to school together, worked alongside each other in Ugandan intelligence and then fought to free their country from the genocidal gangsters who unleashed horror in their native Rwanda. When Kagame became president, Karegeya was put in charge of foreign intelligence services.

But after a decade, their disagreements, including over human rights and attacks on neighbouring Democratic Republic of Congo, became too strong. He was relieved of his duties, stripped of his rank as colonel and jailed. Once free he fled, later joining forces with three other prominent exiles to lead opposition to Kagame’s government.

Obviously a friend of Karegey, Faustin Kayumba Nyamwasa, was shot in the stomach in South Africa in 2010. According to the Independent Karegey  said last year  that the

… Rwandan government can no longer tolerate any dissent. There is a deliberate plan to finish us off.

Ian Birell, who writes the article in the Independent has a point:

For despite the murders, the abuse of human rights, the locking up of political rivals, the ceaseless and now well-documented stoking of carnage and conflict in the Congo, Kagame remains a leader lionised in Washington and Westminster.

The world’s foremost scholar on Rwanda has described him as “probably the worst war criminal in office today.” Another leading academic concluded he was running “a very well-managed ethnic, social and economic dictatorship”.


But Bill Clinton calls him “one of the greatest leaders of our time” while Tony Blair, who works closely with him and has borrowed his plush private jet, hails him as “a visionary leader”. There is similar adoration on the right among many Tories and Republicans; Rwanda was even welcomed into the Commonwealth four years ago.

South Africa and Rwanda. Dissidents are allowed to live and work in South Africa. I am not a fan of President Zuma. I think he is a corrupt leader and last week it was claimed that people were booing at him again, according to Mail and Guardian. But as far as I understand he is not killing his opponents.

Let's hope and pray this year that South Africa will have a free and fair general election - just like in 1994 - and that Rwanda will see, not only economic growth, but also real democracy!

Posted by Anders Göranzon at 14:45 No comments:

However, criticism of Israel similar to that leveled against any other country cannot be regarded as antisemitic.

Posted by Anders Göranzon at 19:27 No comments: