Posted by Anders Göranzon at 20:20 No comments: 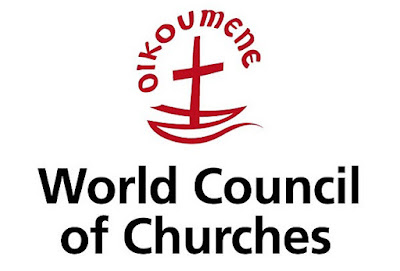 Posted by Anders Göranzon at 20:37 No comments:

Another anniversary! This time the 30st Anniversary of the South African Kairos document. As far as I know, the first document of this sort.

Kairos (καιρός) is a Greek word which means the opportune time. Greek has another word for time, kronos (κρόνος), which is the ordinary clock time.

One of my colleagues in the Church of Sweden, Rev. Anna-Karin Hammar, takes part in the celebrations.
Two other persons I know are Chali Kasonde and Nonhlanhla Mnisi. They are students at the University of KwaZulu-Natal and I know them as dedicated and bright students.

It would have been wonderful to be part of this occasion. But my place is right now in Sweden. That is my Kairos.

Still I want to quote one of the persons who are present at the Kairos Anniversary in South Africa, Prof John de Gruchy. He writes on a blog called kairossouthernafrica:

As we take note of what is happening around the world as well as in our own country, we would be foolishly blind if we did not recognise the global and national crises facing us.  The world has become a much more dangerous place than we ever imagined when we entered this new millennium.  So we should listen to the prophets.  They are not prophets of doom but prophets of justice and hope.  This is God’s time, they declare, a time to grasp the opportunity to change.  So let us not be among those who, as Isaiah said, “look but do not see, or listen but do not hear.”  Rather let us following the counsel of the prophet Micah and the Kairos Document “ do justice, love mercy, and walk humbly with God.”

Since the 1985 Kairos Document in South Africa similar documents have been published in Palestine and Swaziland, just to mention two.

A network for academics working with the Kairos concept is called Grasping Kairos. I am one of them.

The most important thing, however, is to listen to God and find the Kairos document in one’s own context.

What is your Kairos?

Posted by Anders Göranzon at 20:50 No comments:

The dance experience demands a blog post of its own. The project is called 'the Cultural Arts Centre Project at Makumira' and has the European Union, amongs others, as partners.

First we went to a piece of land that has been given to the project, where they intend to build a cultural centre. Right now there is only a stage.

From there we went back to campus and the room where the group were going to perform. There show was a new production and we were the first persons to watch their first dress rehearsal. 45 very intensive minutes!

At the centre was a young woman and she was courted by three men. One sang a very sad and sensitive song to her. The second was a Massai who danced forcefully, making sounds of cattle and also carrying a stick, which he hit the floor with several times. He was joined by four friends and the woman clearly became scared when they danced around her. So she fled.

Lastly a drummer approached her and he did it in a way which she liked. They had close eye contact and he waited for her to respond positively before every move he made.

The dance was very emotional and sensual. I thought about the discussion I had had with the students and realised that Africa really have so many arenas where the conversation around relations and especially sexuality can take place.

The last twenty minutes were a long, vibrant explosion of feelings (and sweat). We were totally overwhelmed. And impressed!

I hope that this project will be supported also in the future and hopefully could this group be invited to perform abroad. Why not in Sweden?

With this powerful demonstration of the rich, African culture, we were both ready to go to airport as well as a bit sad to finally part with Africa.

But we know that we are not parting. We will be back! And Africa will anyhow remain in us.

Posted by Anders Göranzon at 20:40 No comments:

Day eight. Our last day. Usually this kind of day means packing and waiting for the car to leave for the airport. Not for us.

A dance group had made contact with Penina and asked if we were interested in watching their show. Could it be squeezed in? Certainly! But before that Dag had asked if I could sit in when the Master students of the Gender, Theology and Health programmed defended their theses. And the leadership had promised that this was in order.

So, I also managed to listen to one presentation this last day in Tanzania and in Africa. One of Dag’s students defended and the theme was interesting. Something about the parental silence among Pare people, in relation to Sexual and Reproductive Health.

This programme, sponsored by Church of Sweden, with money from Sida, we also have at the University of KwaZulu-Natal. And at Stellenbosch in South Africa and EGST in Ethiopia. I have been a little involved at UKZN. But as far as I know, the students do not defend their theses there.

I will not say much about the thesis as I have not read it. But the comments, at the end, given by the Dean of the Faculty of Theology and by the Vice Chancellor of the Tumaini University Makumira were very interesting.

The VC asked the student if he had spoken about sexuality with his children. Before he could answer the VC confessed that his father never did that with him. When the student heard that he directly said that this was also his experience but that he had started to talk with his children, after he had begun to write his thesis.

Then the Dean made a comment, which I think was extremely important. She mentioned that her aunt had been the person who had spoken to her about these things and that one should not forget the contribution of other, significant adults, close to the children.

When I had left the one defense that I were present in, I joined a group of Master Students, that were waiting outside the building to hear the results of each and every student. With them I had a very open discussion about sexuality in general and LGBTI in particular. I was amazed how openly these things were discussed.

I am very glad that I also got this important experience from my visit to Tanzania.

Posted by Anders Göranzon at 21:21 No comments:

After breakfast we left in the sunrise. In South Africa we are used to very early morning tours. Our guide was not in a hurry and it was well over eight when we reached the main gate. It took some time to get in and I thought we would miss the show.

When we climbed the crater and Moody drove on top of the edge for almost half an hour it was extremely misty. We saw nothing and I thought that we had made the trip in vain.

When I asked Moody about this, he promised that the weather would improve when we got to the bottom of the crater. And of course it did. And it also improved generally speaking. Just like Kilimanjaro, the Ngorongoro crater has its own weather system.

We saw almost everything, except – of course – leopards. I have lived in Africa 7½ years and visited numerous parks. But never have I spotted a leopard. I start to think that Moth
er Nature’s message is:


You and your kind are messing with me. This is my answer. And it is only the beginning.

Are we really civilised? I have strong doubts. Especially after having seen the Massai cattle herders leading hundreds of cattle down the slopes of Ngorongoro. We had just seen at least 15 lions. How did they dare? So, Moody told the story we had heard from others also. The lions and the Massai have a truce.  The Massai never hunt game. And the lions don’t take cattle from the Massai. I love this!

It was a bit disturbing that we also saw approximately 20 cars, where we saw the 15 lions. But we should not complain, since our car was part of the traffic jam.

One thing that was special with the crater was the variety of birds. Stork, grey crowned crane, pelicans, flamingos, eagles, vultures and many smaller birds like the beautiful blue starling and the colourful lilac breasted roller. Not to mention the secretary bird and the heaviest flying bird:  kori bustard.

Very satisfied, after almost five hours of intense game viewing, we began our journey back to Makumira.

As if the day was not good enough, Dag had arranged a wonderful dinner when we got back. Penina had helped him and at the table we also saw Mary and Msafiri. What a fantastic last evening.

Posted by Anders Göranzon at 11:12 No comments: