Inevitably this day had to come. Every human being has to die. Even Madiba. Nelson Rolihlahla Mandela. Still it feels strange. Mandela is a person who at one stage by some were described as a terrorist and by others as a hero, who during his own lifetime became a legend. In South Africa a number of streets, roads and even a municipality are named after him.

Lots of people in South Africa have looked upon him as a guarantee for stability and democracy in the country. This is of course understandable. His personal journey has to fill every person on this earth with respect. For many years though, Mandela had left the official scene, before his death. The stability in South Africa is something that many South Africans can be proud of. There are of course many corrupt politicians and state officials. There are likewise criminals, greedy businessmen/women and lots of just ordinary persons who make wrong decisions. But there is also another picture. After almost two decades South Africa is functioning. Of course with too much poverty and injustices. But still, we haven’t seen civil war or massacres. The president, Jacob Zuma, has managed better with HIV and AIDS then his predecessor. So even this day, or especially this day, we need to reflect on whether it is true or not that the stability in South Africa depends on whether or not Mandela is alive. Instead of living with Mandela we now have to live only with his legacy. My interpretation, living in South Africa for the third time, is that South Africans in general admire Mandela because they subscribe to his values. They seek reconciliation although it is difficult or even non-achievable.

This day the best way of paying tribute to a legend who has lived an impressive life is to live according to his ideals:


If there are dreams about a beautiful South Africa, there are also roads that lead to their goal. Two of these roads could be named Goodness and Forgiveness.

So, the message is this: every South African now needs to carry the values of Mandela in her/his own body. If everyone carries a little bit, a new miracle is possible. 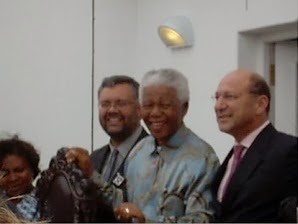 My wife took the picture when Mandela handed over the keys to the first persons
who moved back to District 6 in Cape Town in February 2005.
Posted by Anders Göranzon at 07:24

Yes indeed! I agree with what you say. Thank you, Anders for expressing so well what so many of us feel! One of the hightlights of my life was when I was entrusted with the task of functioning as a Peace monitor and Election observer during the 1994 election i the RSA.I am, of course, one of those who love that wonderful country and continue to pray for it. Gudrun

Thank you for doing that, Gudrun!