A national day of prayer and reflection 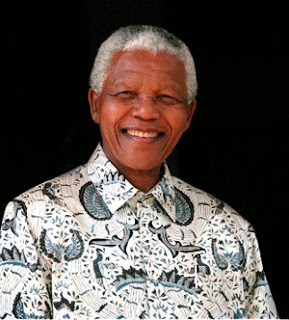 This can be read on the Governments official website on the death of former President Nelson Rolihlahla Mandela:

Government reiterates President Jacob Zuma’s call to faith-based organisations and society at large to hold prayer services across the country to reflect and celebrate the life of former President Nelson Mandela. Today, 8 December 2013, has been declared as a national day of prayer and reflection.

Last week I was asked to lead the service in Eastwood, where we usually attend church. By then I was not aware of Mandelas death, let alone of the national day of prayer and reflection. So, yesterday, I phoned and asked our Dean Myaka for advice. His thought was that the prayer should focus on three things:

I. Prayer for Mandela's family II. Celebration of his life III. A prayer that the leaders of today and all of should live Mandelas legacy in our lives

Before the service started I therefore asked three of the elders to lead us in prayer around these three themes. It became a touching moment, which started the service.

For me it was natural to focus on Madibas life in the sermon so therefore I publish the sermon her:

Sermon on the Second Sunday of Advent 2013

It is not difficult to find a verse in one of our bible readings that would make us think of Madiba. I read from Isaiah 11 verse 10:

A day is coming when the new king from the royal line of David will be a symbol to the nations. They will gather in his royal city and give him honor.

And also from the same chapter of Isaiah verse 3 and 5:

He will not judge by appearance or hearsay; he will judge the poor fairly and defend the rights of the helpless.

He will rule his people with justice and integrity.

I believe that Mandela fought for the poor and those who seemingly are helpless. But one can of course discuss if any person is helpless? On the contrary I believe that every person has power – sometimes s/he only needs help to find courage to use it.

The gospel today, from Matthew 3, is about John the Baptist. He was the last but not the least of all the prophets of the old covenant.

Can we compare Mandela and John the Baptist? I think so. Especially Madiba before he was imprisoned. I do believe that he was a prophet. As powerful and fearless as the Baptist. But after his release something changed. Remember, what he said after his release when he spoke to the nation:

I stand before you not as a prophet but as a humble servant of you, the people.

The Nelson Mandela that came out of prison was the nation builder and the reconciler.

Based on this, I would like to start my sermon in the Gospel and end in the Isaiah reading.

John the Baptist is also a judge. His judgments are fair but not always pleasant. He continues:

… every tree that does not bear good fruit will be cut down and thrown in the fire.

This can be said into every human situation. I would like to say that the rich of this world and of our South African society is like that tree. It is not bearing fruit. The fruit was meant to be enough for everyone. But it is not. The fruit is not being shared.

If John the Baptist could come back to this country – but also to my own country, Sweden – he would have a lot to do. He might say to the leaders:

You snakes—who told you that you could escape from the punishment God is about to send?

We must of course, each and every one ask ourselves: could I have done more? But it is my belief that the Baptist was talking to people in privileged positions and not to the poor. This is important to remember. At the specific moment he spoke to the leaders of the nation at the time.

It could have been Mandela before he was imprisoned:

True, the struggle will be a bitter one. Leaders will be deported, imprisoned, and even shot. The government will terrorise the people and their people and their leaders in an effort to halt the forward march; ordinary forms of organisation will be rendered impossible. But the spirit of the people cannot be crushed…until full victory is won.

This he said in 1951. In many ways we still have a long way to go. But there is hope. Isaiah writes:

2. The Royal line of David is like a tree that has been cut down; but just as new branches sprout out from a stump, so a new king will arise from among David’s descendants.

Traditionally we have read this as a prophecy pointing towards Christ. Jesus Christ is that branch that will sprout out. But the prophet speaks about branches in the plural. And we know that one image of the Church is a tree. Where Christ is the stem and we all are branches.

Let this be our prayer that God will give us courage and wisdom to be those branches, which will give new life and hope to the whole world. Branches that will bear fruit and share those fruits with others.

This is the vision of Isaiah. The peaceful Kingdom where

… wolves and sheep will live together in peace, and leopards will lie down with young goats.

We all know, that there will be no peace without justice. Likewise reconciliation needs justice in order to work.

In 1985 a number of theologians in South Africa published the Kairos Document. Those theologians made a difference between Church theology and Prophetic theology.

About Church theology and reconciliation they said – and remember that this is said five years before Mandela was released:

In our situation in South Africa today it would be totally unChristian to plead for reconciliation and peace before the present injustices have been removed. Any such plea plays into the hands of the oppressor by trying to persuade those of us who are oppressed to accept our oppression and to become reconciled to the intolerable crimes that are committed against us. That is not Christian reconciliation, it is sin.

Prophetic theology on the other hand brings hope:

Jesus has taught us to speak of this hope as the coming of God's kingdom. We believe that God is at work in our world turning hopeless and evil situations to good so that his "Kingdom may come" and his "Will may be done on earth as it is in heaven." We believe that goodness and justice and love will triumph in the end and that tyranny and that tyranny and oppression cannot last forever. One day "all tears will be wiped away" (Rev 7:17; 21:4) and "the lamb will [li]e down with the lion" (Is 11:6). True peace and true reconciliation are not only desirable, they are assured and guaranteed. This is our faith and our hope.

Through Madiba much has been achieved but there is so much more to be done. We pray that God will continue to lead Gods people.

Posted by Anders Göranzon at 12:13

Awesome, the sermon at out church was along those lines. Mandela was placed in that transition of governments by God because God's people prayed. He was such an honourable man.

Thank you, NeoPixel, for sharing this!