How to induct a dean 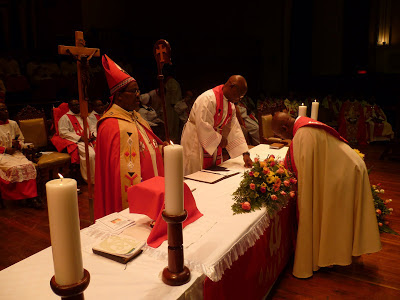 We have just returned from Durban. We left Pietermaritzburg 7.15 am this morning and came back 4.15 pm.

Service of the Induction of the Dean

The dean’s name is T C Nzama. He has already served as a dean for 6 years so now he was re-installed for another 6 years. A big feast for the Evangelical Lutheran Church in Southern Africa - South Eastern Diocese (ELCSA-SED) and more especially the Durban Circuit.

We arrived in good time. My wife remained in the Hall while I went “back stage” where all the priests and bishops gathered. Bishop Phembukuthula Buthelezi asked me if I could do one of the readings and I gladly accepted. I read 1 Tim 4:14-16

Do not neglect your gift, which was given you through prophecy when the body of elders laid their hands on you.
Be diligent in these matters; give yourself wholly to them, so that everyone may see your progress.
Watch your life and doctrine closely. Persevere in them, because if you do, you will save both yourself and your hearers.

As mentioned in an earlier blog post a dean in ELCSA has much more responsibilities than in Church of Sweden (CoS). Therefore it makes sense to make more of the installation or induction. But even taken into account that I have lived in South Africa before, I did not expect this kind of event. The City Hall was not packed but there must have been more than 1 000 persons. People were dressed in uniforms, as I thought. The only colours were the red liturgical colours on the clergy. The rest was mainly black and white.

I would like to share a YouTube clip from the service. I recorded a gospel choir from one of the parishes in the circuit. They performed during the offering. Beautiful. Although my video is of rather bad quality. Watch it here! 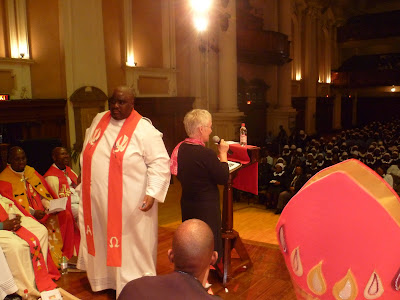 After the induction and the main service (which took approximately 3 hours) part II followed: Isigaba sesibili. I believe the translation is: “Presentation of gifts” because that is what happened. After some opening remarks, a musical item and information about the Luther Decade messages of greetings were delivered. My wife said a few words on behalf of the Skara Diocese in CoS, which has a twin diocese partnership with ELCSA-SED. After that followed greetings from ELM, a German mission organisation (Evangelisch-lutherische Missionswerk in Niedersachsen – usually referred to as Hermannsburg mission.)

Thereafter it really started. First of all the other deans received gifts. Thereafter the bishops also got something. And then it was time for the presentation of gifts to dean Nzama and his family.

This may of course raise a number of questions: is it appropriate to present gifts like this, right after a service, while all the clergy still wear their vestments? Why the focus on material things? How did the other deans feel about all the gifts given to the dean of Durban? (Durban circuit is probably the biggest circuit in ELCSA and I guess one of the wealthiest).

Having said this I still have to admit that I was amazed by the love and care that people showed their dean. One has to bear in mind that he already served six years. Now he is in for another six years. And this is the time to give him gifts. In CoS you receive gifts when you leave a parish or a circuit. Or on your birthday. But parishioners would not present gifts in advance. I was impressed.

So what kind of gifts did the dean and his family get? Well, some of it was wrapped in paper but we believe that the young adult’s league gave a plasma TV. The youth a lounge suite and the women’s league a brand new car! There were also other gifts from the men’s league and from the colleagues but we did not see what they gave.

Church members in Sweden giving their priest a brand new car is unheard of. But on the other hand an ordinary Swedish priest receives a monthly salary which allows him or her to buy a brand new car if that is what she or he would like to prioritise.

The dean of Durban circuit has a huge responsibility and I am sure he will carry out his work more efficient with a car that is functioning. That’s why he, in his very short vote of thanks said: Thank you all! I will not let you down! After six hours we got into our car and drove home. We also have a brand new car, although it belongs to CoS. But does it really matter. The important thing is that you have the means of transport, in order to be able to carry out your duties. 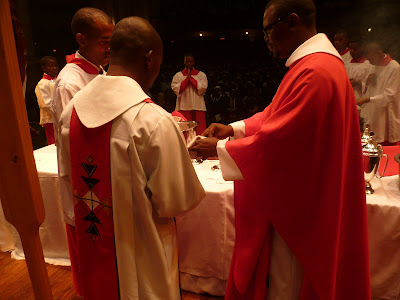 The presiding priest washes his hands during the Eucharist. In Latin: Lavabo. 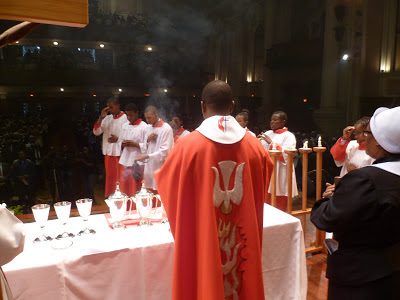 The services in ELCSA-SED are quite high church with incense and acolytes. During Agnus Dei the acolytes, surrounded the altar and with their hands, they all pointed to the chalice in something I would describe as liturgical dance, albeit in a very solemn way. Undfortunately I did not get exactly that with my camera.

Posted by Anders Göranzon at 20:39