Induction of a new Dean

You find many differences if you compare Church of Sweden (CoS) with the Evangelical Lutheran Church in Southern Africa (ELCSA). One of the most striking is the role of the dean. (In Swedish this is: “Prost”). The dean in CoS has rather few duties. She or he gathers priests and deacons in the circuit at least twice a year. Sometimes more but in some circuits it only happens those two times. The bishop of a diocese in CoS will meet the deans regularly. Sometimes also the dean leads services when Parish Halls or parts of cemeteries are dedicated.

In ELCSA more focus is put on the dean. The deans are ex officio members of the Diocesan Council (this is a combination of Domkapitel and Stiftsstyrelse). In every Circuit there is a Circuit Council and all the leagues (syförening, kyrkobröder, kyrkans unga, kör etc) and organisations of ELCSA meets on Circuit level. Most of the time the dean needs to attend to these meetings and rallies (sammankomster). (In the Swedish context there are no longer Circuit Councils. At least they are not compulsory!)

Tomorrow we are going to be part of the Induction of the new Dean in the Durban Circuit of this Diocese in ELCSA. The service will be held in the City Hall – many people are expected to come! I have never heard of anything like this in CoS. Is the Dean at all inducted? In ELCSA a deputy dean is also elected. I don't think we have that in Cos.

We look forward to this event. Some people will be familiar to us but most of them we will meet for the first time. It will definitely be impressive to see all the clergy in white robes and red stoles, chasubles (mässhake) or even copes.

Some of the congregants will also be dressed in special clothes. The members of the women’s league in black and white. The men’s league in grey trousers, white shirt and black jackets, if this diocese, the South Eastern Diocese (SED) of ELCSA uses the same colours as the rest of ELCSA, which I believe they do.

I know that there is a discussion about the use of uniforms in the church. In CoS there is no equivalent. But then we don’t have school uniforms either. Of course it is a difference between a much more individualistic culture (Sweden) and a more collectivistic (Southern Africa). 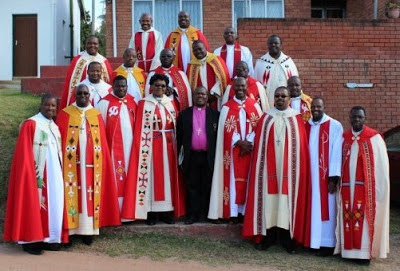 Posted by Anders Göranzon at 21:25