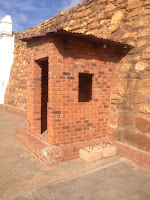 For the first time we visited Constitution Hill today. The old fort, where Nelson Rolihlahla Mandela was an awaiting-trial prisoner in 1962. This was before the Rivonia Trial. He was kept in the hospital section, in the Old Fort itself. The Fort was for white prisoners only. As far as I understand Mandela was not sick. This was a way to keep him away from the other black prisoners.

We were more surprised to see Paul Mokgethi-Heath and JP Mokgethi-Heath on a poster. Impressive, I must say. There were a number of posters illustrating different kinds of human rights issues that the Constitutional Court in South Africa had ruled on. Same sex rights being one of them.

Posted by Anders Göranzon at 13:09