Pre-assembly of Women and Men finished!

It has been a good experience to be part of this event. First of all I have met many wonderful persons from all over the globe. I had lunch with a new friend from Serbia. In the bus that took us back to the hotel I sang a Swedish hymn (Bred Dina vida vingar, O Jesus över mig) together with a professor from India, who actually suggested we should sing it. The professor had been to Sweden a year and we could actually communicate freely in Swedish. I was impressed.

The question this morning was of course: Had the draft committee been able to reach consensus about our statement? They were supposed to meet at 8 am in a café named “Café B”. What they didn’t know was that there were at least two cafés with that name. So one group waited at one of the cafés and the other group started at the other. There were some frustration and I had to leave the Pre-Assembly to help them find each other. Eventually they did and started to work.

In the meantime I was asked to answer some questions by the communication department of the WCC. So, when the men met during the first coffee and tea break I stood in front of a TV-camera. After the interview I rushed down to our room where the other men were working themselves through the document. I spent a few minutes but realized:

This is not working. It takes too long time!

So, I excused myself and asked Victor (who is a radio talker) to come with me and join the Pre-assembly. We were just about to enter in to the next session:

Report back from the Women’s and Men’s separate gatherings.

What were we to say? (I asked Victor to talk, since I had heard that Marit was going to talk on behalf of the women. Two Swedish persons in report back session would have been awkward. Victor is from Malawi!)

Luckily the moderator started with the women. So, when it was time for Victor to say something, he had been able to write down some notes and he did well. When he was about to wrap it up, the other men entered the Ballroom and I could see that they had a statement. So, they asked if they could read it and the moderator said OK.

All of us men stood up in the midst of the women and Maxwell started to read:

We the men in the first WCC Women’s and Men’s Pre-assembly express our immense gratitude to women who have enabled us to understand the pain and injustice of patriarchy and gender inequality.  We have experienced transformation in our lives, by the grace of the God of Life, which has begun to open our hearts and minds to a shared struggle for gender justice. Yet, we are painfully aware that we men still have a long way to go on our journey toward a true community of women and men in the churches and in society at large.

The statement was longer, but I stop here. After our statement was read up, the whole ball room gave applauds. After that the moderator invited us all to stand up and then she prayed and it was really a precious moment. I felt relieved and happy!

After that I was going to moderate the next session. So I still had to be concentrated. And the tension came back when there was an announcement from the management of the BEXCO Conference Centre spoken in the loud speakers. I had to stop the presenter and then we all heard:

Police is searching the whole centre. There has been a bomb threat. They will go in with dogs. There is no need to panic.

It was given two times in English and two times in Korean. I went to the microphone and suggested that we should continue, which we did. But we were really thrown into the harsh reality of many people around the globe.

There are groups in Korea who have strongly negative sentiments when it comes to the WCC. In the Korean Newspaper "The Korea Times" I read about the Christian Council of Korea (CCK), which is one of the ecumenical organizations of Korea:

CCK insists that the WCC runs against core Christian values because it supports religious diversity and is willing to discuss the acceptance of sexual minorities in the church.

The truth is that the WWC is very careful when it comes to these issues. Many member churches feel that the Council is moving too slowly. But there are other member Churches who feel that the Council moves to fast. Not an easy situation. I don’t think that the question of sexual minorities even will be discussed in the plenary.

I don’t say that those in Korea who are critical against the WCC are behind the bomb threat, but when we went outside for a photo shot, people had gathered to protest about the Assembly. And a large police force was there to protect us.

The protest is OK. It is part of democracy. So, until we know for sure who came with the bomb threat I have decided to listen to the police: 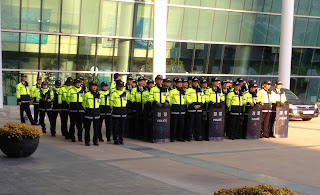 These are some of the police women and men that were posted outside the conference centre.

Posted by Anders Göranzon at 14:42