First day of the Assembly

This morning I had time to get outside the hotel and run on the beach front. Not for a long time but it was nice. The days are so long. One really needs a lot of oxygen.

The day started with an orientation session for the delegates, advisers etc. I attended it and it was interesting. At 10.15 the gathering Prayer began. Many thousands of people from all over the globe and from many different churches and denominations were there. Inspiring!

A very powerful moment is of course when all pray the Lord ’s Prayer in their own language. But I was also moved by the first part of the prayer which was called Lamentation. From all regions perspectives were given. While one person lamented with words, an artist/dancer was lamenting with her/his body, using ashes as a very visible sign, spreading this all over his/her body. Powerful. 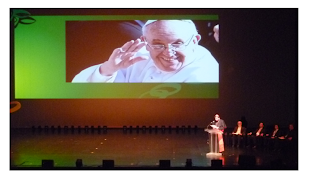 The opening plenary included many greetings from present and absent persons, like the Pope and the Ecumenical Patriarch. But the more significant messages were given by four young delegates from Cyprus, Brazil, South Africa and Fiji. The person from Brazil, Thomas Kang, has Korean parents. The father from the North and the mother from the South. It gave deep meaning to the theme:

God of life, lead us to Justice and Peace.

It has to be said that the leadership of the WCC made a good decision to give the floor to four young delegates.

After the formal opening and all the greetings the Korean host committee presented a wonderful performance, where we were taken through the painful history of Korea. This unsolved conflict really plays a significant part in many respects. 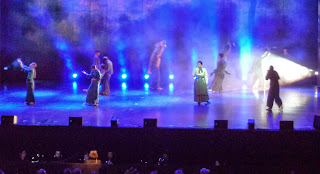 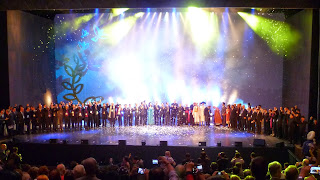 At the end on the show bishops, metropolitans, cardinals and others were invited to the stage to join hands with the Korean people. Symbolic!

The reading of long reports from the Moderator and General Secretary was of course not so exciting. But nevertheless important. After a tea and coffee break some initial decision were taken in a so called Business Plenary. It is nice to experience the Consensus method in function. At one stage all raised orange cards except one person who raised a blue card. So the moderator gave that delegate an opportunity to voice out the problem. Only thereafter was a decision taken.

With the consensus method there can also be decisions taken when a minority are against the decision, but then the moderator has to make sure that the minority has been heard and are OK with that. Both majority and minority have to take responsibility for this, when a consensus cannot be reached. Then they agree to disagree. 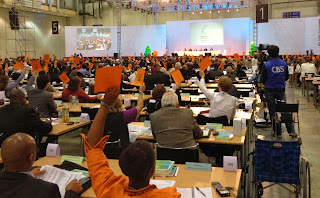 Delegates showing orange cards - signalling that they are in agreement with the proposal. The young woman in orange dress is Thabile Lolo from Eastern Cape in South Africa. She was one of the four young delegates on the stage earlier.

The evening prayer was fantastic. Anglican evensong! I just love it! After that the Church of Sweden had late dinner together, which was also important. Now some sleep is needed. Tomorrow the Assembly will be visited by the Prime Minster of the Republic of Korea. We need to be in the Auditorium early. Security!

Posted by Anders Göranzon at 15:13